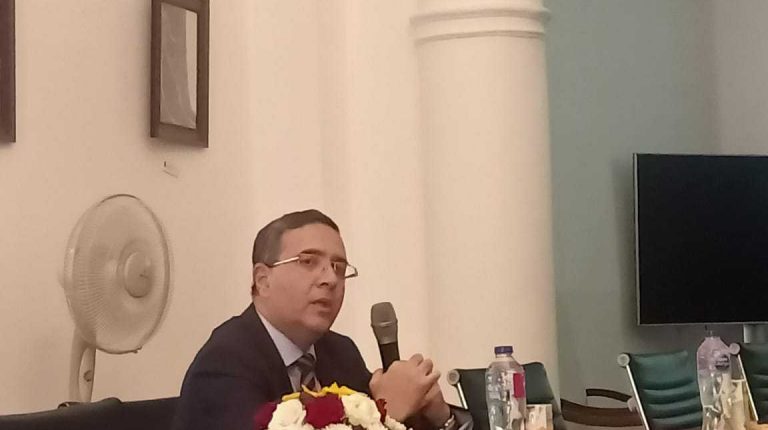 India reached a major milestone in its fight against coronavirus by administering a record cumulative 1 billion vaccine doses on 21 October, thereby also becoming only the second country after China to do so, Ambassador of India to Egypt, Ajit Gupte announced in a press conference held on Tuesday.

He explained that out of the total doses administered, over 550 million doses have been given to the 18-44 age group, followed by 270 million to 45-59 age group, and 160 million to people over the 60 years of age. He said that more than 700 million or over 70% of the eligible adult population have received at least one dose of the vaccine, while more than 250 million or 25% of the eligible adults have been administered both vaccine doses.

India recently boosted its vaccination programme by approving ZyCoV-D developed by Zydus Cadila, the first vaccine for those under 18. The ZyCoV-D vaccine is also the world’s first DNA vaccine against Covid-19. Several more vaccines are in various stages of approval. More than 57,000 centres, primarily State-run, offer free jabs, but people can also pay for a dose at private facilities. The Government is spending around $5billion to provide free doses at state-run clinics, public health centres, and hospitals.

Gupte explained that the Indian government will start vaccinating children in early 2022. Indigenously developed Covaxin has been recently given emergency approval for use in children aged 2 years and above.

He said that his Government plans to significantly increase the pace of its vaccination drive and administer another 1 billion doses in the next 3 months.

Likely, he revealed that as of 25 October, over 33.5 million patients have recovered since the beginning of the pandemic. India’s recovery rate has been improving consistently and now stands at 98.18%. The daily cases reported have been declining consistently with only around 14641 cases being reported on 24 October 2021. While the cases are declining, the testing capacity has been ramped up significantly to identify a COVID-19 case before it infects others.

The Ambassador explained that India is vaccinating around 7-8 million people daily. It is also making innovative use of drone technology to deliver vaccines to remotest areas. There has been uniform coverage of vaccines delivered to people in all parts of India with some states like Chattisgarh, Sikkim and Goa already 100% covered. India is well on track to achieve its target of vaccinating the entire adult population by year-end.

He said that the declining positivity rate is an indication that the country is slowly but steadily overcoming the pandemic. The daily positivity rate was 1.43% on 24 October and has been below 3% consistently for more than 50 days hinting towards a gradual decline in the spread of the virus.

Also, given the improved Covid situation in India, he said that the Indian government has decided to commence issuing tourist visas. Foreign nationals intending to visit India for tourism purposes will be allowed to enter India on e-Tourist/Tourist visa through chartered flights for group tourism only from 15 October and those visiting by commercial flights will be allowed from 15 November.

“The success of the world’s largest vaccine drive in India has also bolstered its spirit and desire to come to the aid of rest of the world in need on vaccines. With this, India has recently resumed exporting vaccines to other countries that need them just like it had previously done by exporting over 65 million vaccines doses to over 95 countries under the Vaccine Maitri program of the government of India,” he concluded.