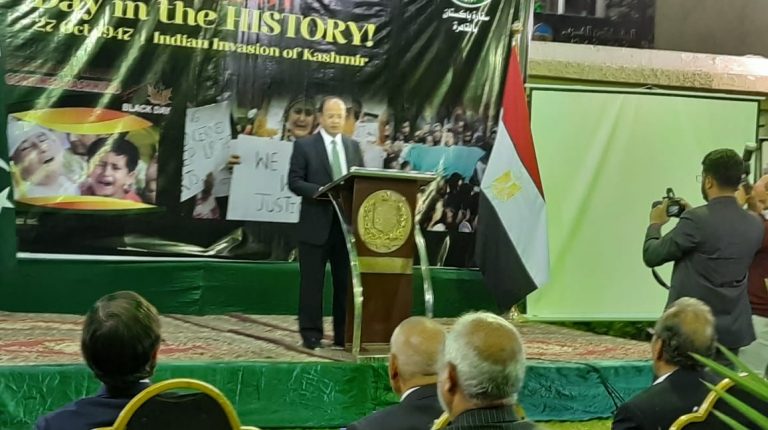 To observe “Kashmir Black Day” a Seminar titled “Kashmir Faces a Grave Humanitarian Crisis” was organized by the Embassy of Pakistan in Cairo, today. At the start of the programme, the messages of the President, Prime Minister and Foreign Minister of Pakistan were read out.

The Guest Speakers in their presentations inter-alia conveyed that (i) Indian Illegally Occupied Jammu and Kashmir (IIOJK) is a disputed territory between Pakistan and India, and no country has the right to unilaterally change its disputed status; (ii) the issue is on the agenda of UNSC and should be resolved in accordance with UNSC Resolutions and aspiration of the people of Kashmir; (iii) Indian government’s  fascist, anti-Kashmiri and anti-Muslim actions should be emphatically condemned by the international community; (iv) Human Rights violations in IIOJK, pose a grave humanitarian situation, requiring urgent attention of the world community; and (v) the international community must act immediately and impress upon India to reverse its actions of August 05, 2019 and stop demographic apartheid of Kashmiris.

Ambassador Sajid Bilal in his remarks, inter alia paid tribute to the Kashmiris for their valiant struggle and highlighted the grave human crisis in IIOJK. The Ambassador reiterated steadfast support of the government and people of Pakistan for Kashmiris’ right of self-determination till Kashmir is liberated from the clutches of illegal Indian occupation.

The seminar was followed by a Photo Exhibition, showcasing the photographs of Pulitzer Prize Winner journalists highlighting the plight of Kashmiris under Indian Occupation.