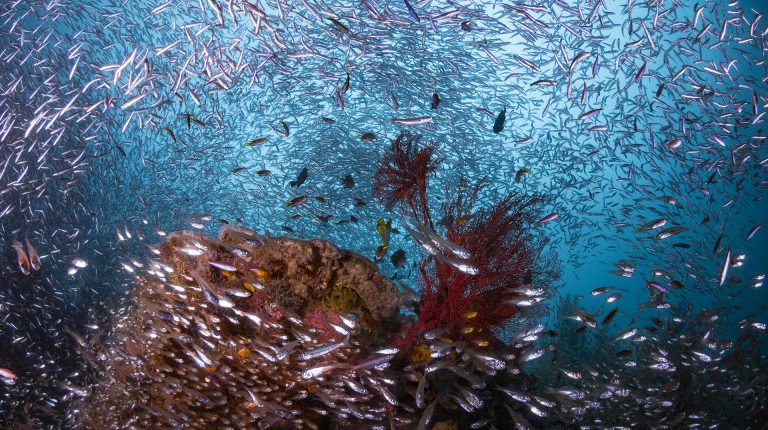 A new analysis suggests that the movement of plankton and plankton-eating fish play a central role in driving local spikes of extreme biological productivity in tropical coral reefs, creating “sweet spots” of abundant fish. Renato Morais of James Cook University in Townsville, Australia, and colleagues presented these findings in a study published on Tuesday, in the open-access journal PLOS Biology.

Although some ecosystems are limited by their intrinsic productivity (from photosynthesis, for example), previous research has shown that mobile resources like plankton can serve as vectors that transfer energy and nutrients from offshore ecosystems to coral reef ecosystems. Such transfers of resources between ecosystems are known as spatial subsidies, and they enable ecosystems to surpass the limits of their intrinsic capabilities for biological productivity, resulting in more abundant life. However, the extent to which the movement of plankton and plankton-eating fish boost abundance in tropical marine ecosystems has been unclear.

To help clarify and quantify this role, Morais and colleagues integrated and analyzed extensive data from visual fish counts. One dataset covered the tropical waters of the Indian Ocean and much of the Pacific, while the other fish count data came from three specific tropical locations that were representative of the diversity of coral reef ecosystems found in the larger dataset.

The analysis revealed that plankton-eating fish do indeed play a major, widespread role as vectors of spatial subsidies to tropical coral reefs. By feeding on offshore plankton, they deliver extra resources to reef ecosystems and thereby drive local periods of extreme biological productivity—including for their predators. In these “sweet spots,” plankton-eating fish are responsible for more than 50% of the total fish production, and people might find conditions there optimal for bountiful fishing.

The researchers note that their findings hold particular significance for the future of tropical reef fisheries. As coral reefs continue to degrade, and offshore productivity is expected to decline, sweet spots that concentrate these dwindling resources may increase in importance for fishers.