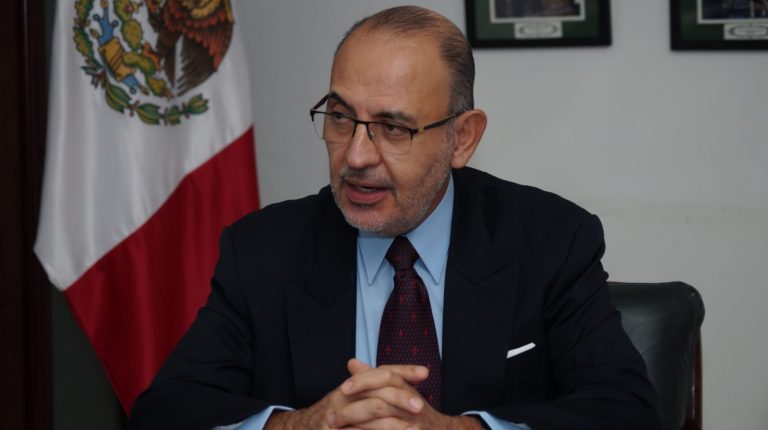 Mexico’s Ambassador to Egypt Jose Octavio Tripp said that his country’s trade exchange with Egypt is projected to reach more than $200m by the end of 2021.

He added that the current trade exchange volume between the two countries is very modest, taking into account the size of both markets.

Daily News Egypt interviewed Ambassador Tripp on all the aspects of the bilateral relations between Egypt and Mexico, and the priority files in Mexico’s diplomatic relations with Egypt in 2022.

The interview also tackled Mexico’s position on some crucial issues for Egypt, including the current dispute with Ethiopia over GERD, the end of the state of emergency, and the newly launched National Strategy for Human Rights, as well as Mexico’s foreign policy with the US and Taliban.

What are the priority files in Mexico’s diplomatic relations with Egypt?

Our top priority is to continue deepening our bilateral agenda in different fields.

I want to mention that the cultural relationship between Egypt and Mexico is impressive and productive, and it’s logical, considering that both countries have ancient civilizations. So we want to continue promoting interaction in this way.

An essential priority in such a context is to interlink the cultural communities of both countries more systematically, and to create opportunities for both communities in regional markets. I mean to help Egyptians connect with Mexicans and Latin Americans, and help Mexicans bond with Egyptians and Arabs in creative industries, including cinema, theatre, music, and dancing.

What distinguishes the Egypt-Mexico relationship?

Interestingly, the main characteristic of this relationship is the extraordinary cultural interaction between both countries. Egypt and Mexico’s cooperation in the cultural field is a paradigmatic case of success.

It was a collective effort with several countries, where Mexico and Egypt were in the chain, to organize and materialize this humanitarian equation. It was an entire equation that promoted multinational solidarity. Egypt played a vital role in providing not only the airplane, but also technical support to take this group of Afghans to Mexico. Finally, they landed in Mexican City. We, in a collective way, saved the lives of around 230 people.

I want to mention that it was very meaningful because, at the same time, it was the first time for Mexico to receive an Egyptian direct flight. It’s interesting because it shows that it is very possible to have direct flights between Mexico City and Cairo.

Do you think we could see direct flights between Mexico and Egypt soon?

Not in the near future, but we are working on it. I can tell you that I recently received an official request from a Mexican business group to find an Egyptian counterpart to organize on a monthly basis charter flights between Egypt and Mexico.

In your opinion, what are the challenges that prevent launching direct flights between the two countries?

The first challenge is to find a real demand in both business communities. Now I am sure of the interest of the Mexican side. The next step is to explore if the Egyptian business community has the same interest to materialize this charter flight programme.

Does Mexico plan to sign new economic deals in the coming year?

This is an open book. The global Mexican companies always explore new opportunities, and we are emphasizing the fact that Egypt is a very relevant multiregional hub or platform that connects different markets. I am sure that some Mexican companies are interested in investing in Egypt.

Will Mexico send any business delegation to Egypt in the coming period?

Yes, the first national business mission from the US and Mexico will visit Egypt in February 2022.

What will be the main role of this mission?

The main role is to explore investment opportunities in three sectors: pharmaceutical, automobile, and agribusiness.

What is the value of the Mexican investments in Egypt?

It is an interesting question because, at least until before COVID-19, Mexico was the main Latin American investor in Egypt. Our investments in Egypt reached around $1bn.

It’s important to highlight that sometimes it is difficult to trace the Mexican investments in Egypt. For instance, there are some Mexican companies whose headquarters are in Europe and because of its legal status in Europe it is easier to open a branch in Egypt. So officially, sometimes this investment is classified as German, Spanish or some other origin, but in reality it’s Mexican.

This is why, as the Mexican embassy, it is crucial to explain the situation in order to clarify how Mexico is the main Latin American investor in Egypt.

I want to mention that last March, I was invited to the opening of the first Mexican company in Alexandria named Polymers of Mexico. The company is sending a message to the Mexican global companies that Egypt is an excellent hub to connect with Europe, the Middle East, and Africa.

What are the challenges that Mexican investors face in Egypt?

We can talk in general about the opportunities that you can find in both countries, but at the end of the day, the investor needs to learn more about specific information, what kind of incentives, for instance, do you have if you’re a businessperson and you want to invest in Egypt, and which part of the country is better to invest in, whether in Alexandria, Cairo, or the Suez Canal Economic zone.

What are your recommendations to encourage more Mexican investors to operate in Egypt?

Try to find specifics, take the second step, and identify the specific goals. Let me give you an example to better understand; if there is a global Mexican company interested in investing in Egypt to produce different products made of corn. This is the first goal, but later on, it is necessary to identify specific goals and get specific information, including taxes, fiscal incentives, the best part of the country to produce corn, and to find local partners, etc.

I think to identify specific information, it is necessary to promote private-public partnerships. For instance, the Arab- Mexican Chamber of Commerce has an office in Cairo, and Mexican businessmen need to know that because it can provide specific information about the economic sectors in Egypt.

Recently, Egypt announced that it would cancel the state of emergency, how do you see this decision?

I think it’s very positive, because it sends a message of security. The general conditions of Egypt are improving every day in terms of security and progress. This is why President Al-Sisi could announce this measure.

How do you view Egypt’s new National Strategy for Human Rights?

How does Mexico see the current dispute between Egypt, Sudan on the one hand, and Ethiopia on the other hand, over the Grand Ethiopian Renaissance Dam (GERD)?

We promote the peaceful solution of the controversies, not only in this case, but in general. This is another rule of the Mexican Foreign Policy. As a matter of fact, it is in our Constitution.

One of these principles is the promotion of peaceful resolution to any kind of controversies. So our position in the United Nations when we deal with this issue is to invite the three parties to solve the situation through diplomatic negotiations. And this is, of course, the position that Egypt is promoting, to solve this dispute through diplomatic negotiation. So, from this perspective, we are promoting the same solution in that context.

How do you see the Ethiopian decision to fill the dam before reaching a final agreement?

Diplomacy and diplomats are very patient and the solution takes time. To be patient is the main characteristic in diplomacy, so no matter how much time is necessary to invest to solve some issues.

In diplomacy, it is necessary to continue in a systematic way, to continue pushing your proposal and solution until you reach what you are looking for, regardless of the time it took you.

Finally, I am optimistic that the three countries will find a way to solve this issue diplomatically.

Would Mexico establish cooperation ties with the Taliban?

What I can tell you is that the golden rule of the Mexican foreign policy is non-intervention in domestic issues of other nations. Generally, we hope to have peaceful and productive relations with everybody.

During Trump’s tenure, there was a tension between Mexico and the United States. Do you think this situation has changed after Trump? How do you see the US-Mexico relations under Biden?

I will put it in a different way, we as neighbour countries always have challenges, including how to manage in a bilateral way, migration and water resources, among many others. So the agenda is always complicated, whether Trump or Biden in the office. So it is not a surprise for us to have complexity or challenges because this is part of the normal daily agenda.

I want to mention that Mexico and the United States have developed specific mechanisms to process controversies. So if we have a controversy regarding migration or water, we have bilateral bodies to process conflict or controversy and reach mutual understanding. These mechanisms are working properly. Sometimes that tension makes the headlines in the media, but we have the bilateral ability to process the controversies. Meanwhile, we continue cooperation in different fields, including security and migration.