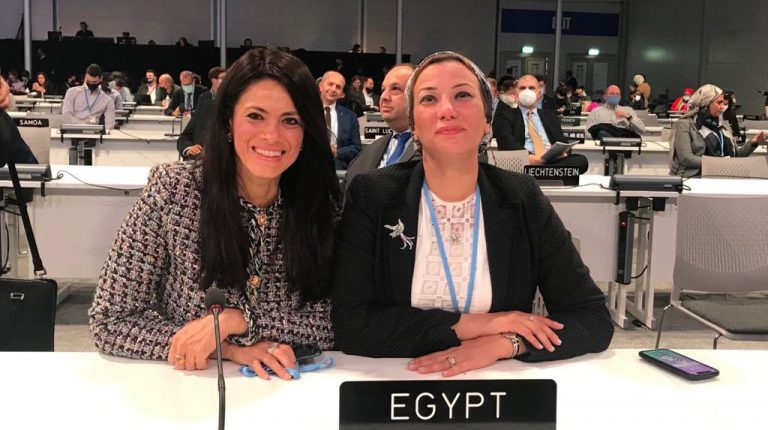 The Secretariat of the United Nations Framework Convention on Climate Change announced on Thursday that Egypt has been chosen as a representative of Africa to host the twenty-seventh session of the Conference of the Parties to the Convention COP27, which is expected to be held in November 2022 in Sharm El-Sheikh.

On September 20, Egypt’s President Abdel Fattah Al-Sisi expressed his country’s interest in hosting the COP27 summit on behalf of the African continent, a desire that met with international support, especially from the United States, the European Union, and the United Kingdom, the host country in the current COP26 session.

The Conference of the Parties to the United Nations Framework Convention on Climate Change is considered the largest and most important international environmental event in the world every year. The delegations of member states to the Convention, the Kyoto Protocol and the Paris Climate Agreement meet to discuss, consult and negotiate controversial issues within the framework of the implementation of international agreements related to climate change.

The conference meets once a year and the main task of the COP is to review the national communications and emissions monitoring lists submitted by parties. Based on this information, the COP shall assess the effects of the measures taken by the parties and the progress made in achieving the ultimate objective of the convention.

Berlin, Germany hosted the first session of the Conference in March 1995. The conference meets in Bonn – the seat of the secretariat – unless one of the parties offers to host the session. The presidency of the Conference of the Parties rotates among the five UN recognised regions.

Samir Tantawi, Climate Change Senior Consultant and project manager of Egypt’s Fourth National Communication for UNFCCC, said that choosing Egypt to host COP27 comes as an appreciation from the international community for the efforts made by Egypt in the areas of development while preserving the environment.

He told Daily News Egypt that “what is known as the Board of Directors of the Conference of the Parties examines the hosting requests and forms a team of specialists from the secretariat of the agreement to conduct a visit to the proposed site to host the conference. The visit inspects the logistical aspects in the country such as infrastructure, transport network, services, hotels, etc., then this team submits its report to the council for a decision, and then submitted to the Conference of the Parties for adoption.

In 2018, Egypt hosted the Conference of the Parties to the Convention on Biological Diversity, which adds to Egypt’s experiences in hosting such important international conferences. Tantawi noted: “The city has already been identified, which is the city of Sharm El-Sheikh, which has many climatic advantages and factors of tourist attractions, security, cleanliness, the airport, and international medical services, in addition to the logistical elements to host global events of the volume of the COP. It is also expected to announce internationally before the date of the conference that Sharm El-Sheikh is an environmentally friendly city with zero carbon emissions.”

The climate change expert noted that the Egyptian government prioritized the climate change file. Accordingly, Egypt has formed a Supreme Council for Climate Change has been formed under the chairmanship of the prime minister and the membership of the relevant ministries. The North African nation has also formed institutional entities within each ministry dealing with climate change issues. This is in addition to the development of power generation projects from renewable and clean sources, whether solar energy, wind energy or hydrological energy, as well as attention to rationalisation and improvement of energy efficiency activities.

Concerning climate financing, Tantawi indicated that many national banks have begun to allocate a financing path for projects with environmental returns. Egypt’s Ministry of Environment, in cooperation with the Ministry of Planning, has issued standards for environmental sustainability.

The Egyptian government is also concerned with the issue of adapting to climate changes through the implementation of several activities and projects to strengthen some areas of the northern coast to protect them from erosion and deterioration, and to conduct research on crop varieties that tolerate salinity, heat and drought conditions.

During her participation in the current session of the conference – held in Glasgow, United Kingdom – the Egyptian Minister of Environment, Yasmine Fouad, launched the National Climate Change Strategy 2050 intending to enable Egypt to plan and manage climate change at various levels, and support the achievement of sustainable development goals and the goals of Egypt Vision 2030 by following a resilient and low-emissions approach, through effectively addressing the impacts and repercussions of climate change.

Jawad Al-Kharraz, Executive Director of the Regional Center for Renewable Energy and Energy Efficiency, believes that Egypt deserves to win the hosting of this conference. “Especially after the efforts made by the state and the projects it implements in the field of renewable energy that fall within the framework of adaptation measures and mitigating the effects of climate change,” he told Daily News Egypt.

Al-Kharraz expected that Egypt, during COP27, will focus on providing the necessary financial support to African countries, in particular, and developing countries in general, to confront and mitigate the effects of climate change.

Egypt has huge capabilities in the field of solar energy production. In 2018, Egypt started the trial operation of the Benban Solar Energy Complex in Aswan Governorate, the largest in Egypt, and is among the largest energy complexes in the world with an operating capacity of 1,465 megawatts, as the complex includes 32 solar plants.

According to governmental statistics, the mega project will enhance Egypt’s energy production capabilities. Egypt’s actual production of energy from photovoltaic solar cells amounted to 3,955 gigawatt-hours in the fiscal year 2019-2020, according to the latest statistics of the Egyptian Renewable Energy Authority. The authority said that the actual production of energy from solar concentrators amounted to 463 gigawatt-hours in the same year.

In a statement last week, the Egyptian Minister of Electricity, Mohamed Shaker, said that Egypt has succeeded in adding electrical capacities exceeding 28 thousand megawatts, to reduce carbon emissions. According to Shaker, his country has the largest electrical capabilities in the Middle East and North Africa, enabling it to produce 90 gigawatts of wind and solar energy.

Renewable energy projects in Egypt in 2020 contributed 20% of power generation, and it is expected to rise to 42% by 2030. Energy generated from renewable resources has reduced greenhouse gas emissions by about 13.6 million tons of carbon dioxide equivalent in 2020.

The Egyptian government aims to generate 42% of the power from renewable energy sources by 2035, in addition to including green hydrogen as an energy source. In August 2021, the Egyptian government, represented by the Egyptian Electricity Holding Company, signed a memorandum of understanding with the German company Siemens in providing energy technology solutions, to develop the hydrogen-based industry in Egypt with the ability to export.

In his speech during the session “Water..a major focus in climate plans” within the activities of the COP26 Glasgow Conference, the Egyptian Minister of Water Resources and Irrigation Mohamed Abdel Aty said that 95% of the ministry’s projects are among the projects of adaptation and mitigation of the effects of climate change.

The minister added that to deal with these challenges, Egypt has drawn up the National Water Resources Plan 2037, at a cost of $50bn, and it is expected to increase to $100bn. The plan includes the implementation of several projects to maximise the return from the water unit and adapt to climate changes, such as water reuse, raising the efficiency of use, projects to rehabilitate canals and watering cans, and switching to modern irrigation.

Amgad Al-Mahdi, regional director for the Middle East and North Africa at the International Water Management Institute (IWMI), said that Egypt has launched several projects that qualify it to transform water systems to enhance water security and climate action. These projects serve as the basis for a climate-resilient future, making Egypt a model in the field of water management that qualifies it to host this summit in 2022.

“The water projects in Egypt began with the issuance of a strategy for managing water scarcity, the new water resources law for 2021, and many megaprojects that reflected the country’s adaptation measures. These measures included lining and rehabilitating canals, modernising the irrigation system, and sewage treatment plants,” Al-Mahdi told Daily News Egypt.

According to Al-Mahdi, the irrigation modernisation project achieves 30-40% more productivity and reduces chemical fertilisers by 60%, and the 1.5 million feddan project.

“The Egyptian government recently opened more than 1,300 greenhouses, with estimated productivity of 184,000 tons annually. This event is part of a larger project that includes 100,000 greenhouses, which is also expected to support the government’s plan to rationalize water use and produce fruits and vegetables, thus helping to secure food security and bridge the gap between production and consumption,” Al-Mahdi added.