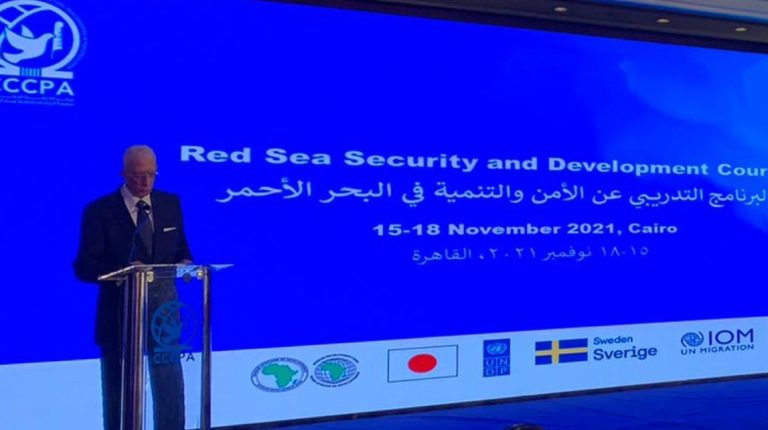 The Cairo International Center for Conflict Resolution, Peacekeeping and Peacebuilding (CCCPA) launched on Tuesday a training course, entitled, “Challenges and Opportunities for Peace and Development in the Red Sea”.

Ambassador Hamdi Loza, Deputy Foreign Minister for African Affairs, said in the opening speech that the Red Sea is now suffering from several problems, including environmental issues and disputes between coastal countries.

He stressed the need for cooperation between the countries of the region in addressing these problems.

Since 2017, Egypt has begun to hold contacts and consultations with the countries concerned in order to build cooperation with them to help discuss these problems and to find solutions to them, he said.

Ahmed Abdel Latif, Director of the CCCPA, said that this training programme includes a number of Arab and African countries to address opportunities and challenges facing the Red Sea region.

He said he was in line with the mission of the CCCPA, aiming to strengthen the capacity of the countries of the Red Sea region and execute various what was drawn in the Aswan Peace and Sustainable Development.

Tarek Adly, Deputy Chief of Staff of the Armed Forces, said that the meeting is due to escalating threats in the Red Sea region, which is a vital attorney of international trade, and in an unstable security environment, which increases the burden on the armies to secure their countries.

He referred to the Red Sea region from a security decline, which is negatively affecting countries as well as growing the phenomenon of terrorism and the continued threat of Houthis in the region and the escalation of smuggling and displacement.

Adly pointed to the new risks affecting the region, like cyber attacks, penetration of information networks of the countries in the Red Sea region.

He stressed the need for joint action and to address all forms of organized crime and work on the development of the International Labor System to address any challenges facing the Red Sea region.

Monica Jurak, representative of the Director-General of the International Organization for Migration (IOM), reviewed the forced displacement and humanitarian crises in the Red Sea. Since May 2020, more than 290,000 people have been displaced due to the crisis in Yemen, she said.

She stressed the importance of cooperation and investing the possibilities to counter the phenomenon of human trafficking.