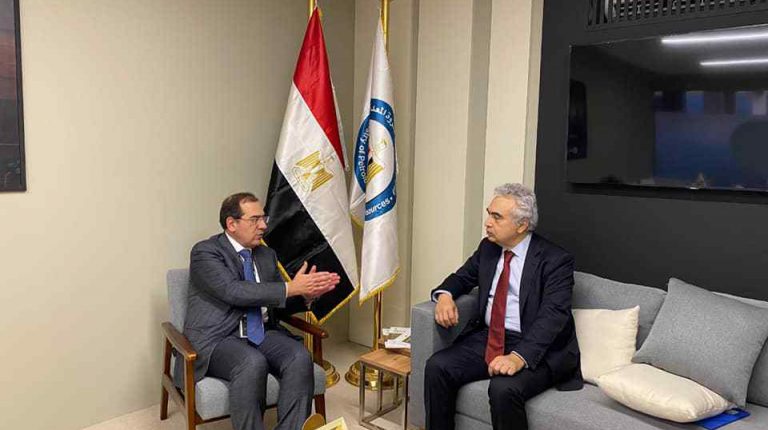 Egypt’s Minister of Petroleum Tarek El-Molla held a series of meetings with leaders of international energy companies and organizations, on the sidelines of his participation in the Abu Dhabi International Petroleum Exhibition and Conference (ADIPEC 2021).

During their meeting, El-Molla sat down with Executive Director of the International Energy Agency (IEA) Fatih Birol to discuss cooperation between Egypt and the agency for the success of the Conference of the Parties to the United Nations Framework Convention on Climate Change (COP27), which Egypt will host next year in Sharm El-Sheikh.

El-Molla indicated that Egypt is keen on cooperating and coordinating with the IAEA as an international organization with global weight, and has previously cooperated in this field with the countries hosting the previous sessions of the conference.

Birol indicated its keenness to enhance cooperation with Egypt and provide all means of support.

El-Molla and Birol agreed to prepare a proposal for a specific action plan for cooperation between Egypt and the International Energy Agency in arranging the COP27 summit.

The two sides will discuss the action plan during Birol’s scheduled visit to Cairo to attend the Egypt International Petroleum Conference (EGYPS 2022) in February 2022.

El-Molla also held meetings with the heads of major US oil and gas companies, including Halliburton and Baker Hughes, to discuss their current activities in Egypt and to enhance cooperation with the petroleum sector.

El-Molla indicated that during his meeting with Joe Rainey, President Eastern Hemisphere at Halliburton, he discussed the company’s plans in the coming period in the field of increasing crude oil production rates.

Rainey affirmed the company’s interest in expanding its activities in Egypt, expressing his aspiration to participate in EGYPS 2022.

Furthermore, El-Molla and Lorenzo Simonelli, President of Baker Hughes Company discussed expanding the scope of the current cooperation in the fields of oil and gas, energy transition, reducing emissions, and the upcoming COP27.

During the meeting, it was agreed to prioritize projects and technologies that can be implemented to reduce emissions, which include technologies to reduce methane emissions and improve the efficiency of flare gas systems, in addition to projects to use hydrogen in power generation.

El-Molla participated in the “Charting the climate action path from COP26 to COP27” ministerial session at ADIPEC 2021. The session was attended by ministers and representatives of the energy sector from African, Asian and European countries to discuss the future of the energy industry and COP26’s key takeaways and the road ahead to ensure a sustainable and resilient future.