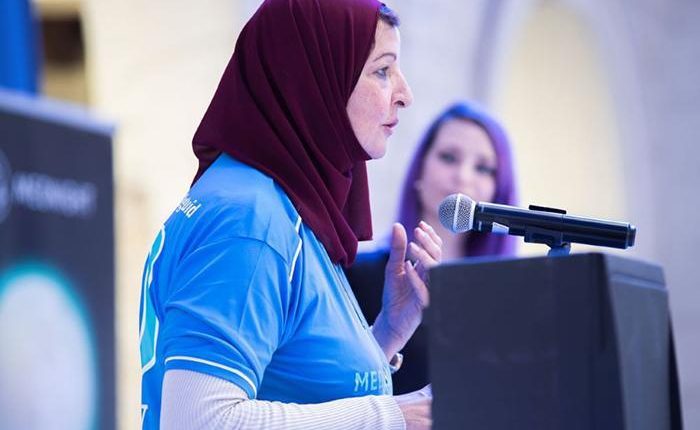 Shattering barriers and stereotypes, the Egyptian geneticist Nagwa Abdel Meguid has proved herself in a relatively male-dominated field. Her studies focused on genetic mutations, namely trisomy, Down syndrome, autism, and neurodevelopment.

Abdel Meguid was one of the first researchers in Egypt to prove that consanguineous marriages are associated with an increased risk for genetic disorders. She specialized in the early treatment of children with genetic disorders and successfully identified several novel genetic syndromes.

Abdel Meguid got her PhD in Human Genetics from the US National Research Council (NRC). She works now as a senior geneticist at the Genetics Institute, California and Yale University, and a fellow of Uppsala University, Sweden. She founded the Autistic Research Group at the NRC. Abdel Meguid supervised around 75 PhDs and Master’s degrees. She has more than 100 publications.

Daily News Egypt interviewed Abdel Meguid to know more about her scientific career. The interview also touched on the future of scientific research and the situation of female researchers in Egypt.

Why did you choose the genetic diseases specialization?

I started my work at the National Research Centre, where I found out that the department of genetics was promising. In fact, my work relates to different fields, such as psychiatry, behavioral neuroscience, and social science. Twenty years ago, I did a major shift in my research as I developed a better understanding of neuro-developmental diseases, such as Autism, Fragile X syndrome, and Attention Deficit Hyperactivity Syndrome.

Did you face any obstacles at the beginning of your career? How do you balance between your personal life and professional career?

One of the main obstacles I faced was the ability to publish my papers as it was very hard for Arab and Middle Eastern researchers to publish their work in international journals.

Winning the L’Oreal UNESCO for Science Award did help a lot in developing my career and introducing me to a world network of scientists to expand my knowledge and expertise.

At the same time, my career did not affect my personal life as my husband was very supportive of my work.

What is the epidemiological situation of genetic diseases in Egypt?

It’s estimated at 3%, due to the high rate of traditional consanguineous marriages in Egypt (20-40%).

What is the main cause of these diseases?

I believe that the Government is moving towards combating genetic diseases especially among newborns as the president launched an initiative for early detection of genetic diseases pertinent to the newborns. This initiative targets 19 genetic diseases, with 7 centres across Egypt equipped for this purpose. A medical survey of newborns will be conducted at all the hospitals of the Ministry of Health, universities, and the private sector.

How can we protect future generations from genetic diseases?

At first prenatal diagnosis, awareness about consanguinity and its reflection on different genetic disorders should be made. Additionally, the reproductive health should be checked since a relatively high birth rate of infants with chromosomal disorders are related to the advanced maternal age and increased number of birth deliveries, such as Down syndrome.

From my point of view, what is more important than the diagnosis is raising awareness among parents. The people in rural areas are the most affected due to their lack of education and awareness.

You are one of the first researchers in Egypt to link genetic disorders with consanguineous marriage, could you elaborate on this issue?

Large family sizes may increase the number of affected children in families with autosomal recessive conditions. In addition, the lack of public health measures directed at the prevention of congenital and genetically determined disorders, the shortage in genetic services, and the inadequate health care prior to and during pregnancy may all contribute to the occurrence of genetic disorders.

For instance, autosomal recessive disorders have been reported to account for 80% of the single gene disorders. Genetic factors also play a role in the cause of common multifactorial disorders. The importance of these common disorders is progressively increasing among Arab and other Eastern Mediterranean populations.

You formed the Autistic Research Group at the NRC, could you elaborate on this group?

Families of children with Autism Spectrum Disorder (ASD) are vulnerable, and they are expected to experience greater burdens. ASD children manifest a lack of social communication and reciprocity with the presence of restricted and repetitive patterns of behaviour.

Studies targeted African Arab-speaking countries indicated that among children with special needs, ASD prevalence was (33%) in Egypt. The lack of knowledge and experience about ASD or the proper diagnosis methods among health professionals could lead to either a high rate of ASD diagnosis (which could be an inaccurate diagnosis) or missed cases and late diagnosis.

It also has been reported that pediatricians are the first specialist group that the parents of ASD children usually consult, followed by phoniatricians or speech-language pathologists. A multidisciplinary team should assess children who are suspected of having autism. This team should include a psychiatrist, a geneticist, a pediatrician, a phoniatrician, an audiologist, a psychologist, and a social worker. Many risk factors have been proposed to be linked to ASD. These risk factors included genetic risk factors, which could account for up to 40 % of ASD cases, and environmental risk factors, which constitute about 60 % of possible risk factors for developing ASD. Although some of the ASD children’s parents are familiar with the term, they do not know the disorder’s nature.

How could customized nutrition improve the behaviour of autistic children?

So, deepening the role of the gut microbiome may be fundamental to elucidate the onset of GI symptoms in ASD individuals and their etiopathogenetic causes.

Additionally, research on the gut-brain axis is expanding, and different ASD models revealed GI dysfunction. It is also revealed that ASD children had more responses to food allergens as evaluated by positive pinprick reactions. The influence of the microbiota of the digestive tract on the human body and its neuro-psychic status is mediated by exposure to the hypothalamus-pituitary-adrenal system.

Modification of this system function by microbial neuroactive compounds predisposes to the occurrence of depression, anxiety, bipolar disorder (intermittent periods of mania and depression), and chronic fatigue syndrome. Future studies should examine novel approaches for the possible therapeutic management of GI dysfunction in ASD.

You received the National State Award of Excellence in Advanced Technology, so could we talk in depth about this award, how was the selection, I mean, was it a nomination or you applied for it?

This award is given through nomination, and universities and research centres compete among each other. Every year, only one award for Excellence in Advanced Technology is given. Furthermore, there are jury members who are highly qualified, from different Universities, to select the winner.

Finally, the selection criteria depend on; publications in reputed Journals with a high impact factor, High H Index, membership in various Scientific Journals, the impact and the reflection of discoveries on the society, the patents, the amount of activities in the society for women, and the international collaborations.

You were the first Arab laureate of the L’Oreal UNESCO Award for Women in Science in 2002, how were you nominated for the award?

I was nominated by an African Laureate who received the award in 2001 and I got it in 2002.

I was selected through an international jury who focused mainly on my international publications and scientific work covering the needs of Egyptian society.

How can you evaluate the situation of scientific research in Egypt? How did COVID-19 affect this important field?

The status of scientific research is advancing and this is via measuring innovations, having international publications, engaging the industry of Scientific Research, increasing research funds, preparing eligible individuals to fulfil their mission in society and carry responsibilities towards its nation.

COVID-19 delayed the completion of some projects due to some restrictions on collecting samples of these researches. However, I took advantage of this time off and wrote a chapter about the prevalence of intimate partner violence against Arab women in consanguineous marriages. It was published by Springer, a publishing company, in 2021, in a handbook of healthcare in the Arab World. In addition, I put together a manuscript entitled: “The Influence of COVID-19 Pandemic Lockdown on an Egyptian Population with Down Syndrome”.

How do you evaluate the situation of female researchers nowadays?

To start with, the country must prioritize improving both the situation of women and scientific research.

Women have always played pivotal roles in Egyptian society. Meaning, the new generations of girls proved themselves quickly, garnering top academic rankings, as well as enrolling in institutions of higher education in which female to male ratios often exceeded 50%.

The latest update on the status of women in science offers some good news where the proportion of female researchers increased across the world.  Female researchers, on average, publish fewer papers than their male counterparts, which can hinder their future career prospects. So, there is still a gender gap in the publication productivity among scientists.

Also, we have to mention that female researchers are still less likely to collaborate internationally.

What are your goals and aspirations in the coming period?

Egypt has realized major improvements in human development, including expanding access to education, reducing the burden of communicable diseases, and increasing life expectancy. Nevertheless, the lack of successful therapy and genetic heterogeneity still make autism one of my most challenging disorders. So, my aspirations entail creating more innovative treatments for autism soon.