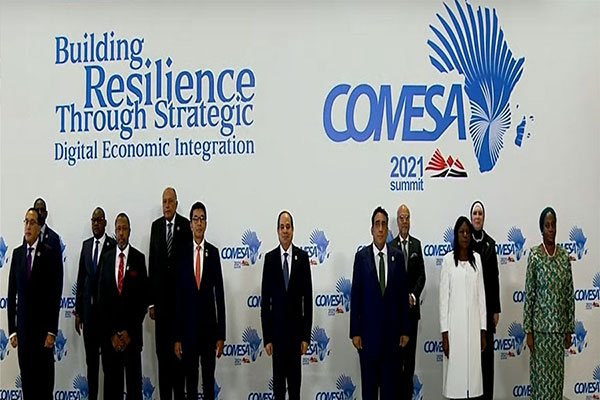 Egypt’s President Abdel Fattah Al-Sisi assumed the chairmanship of the 21st Summit of COMESA Heads of State and Government, which kicked off on Tuesday at the New Administrative Capital (NAC).

The Egyptian President asserted that COMESA member states should develop policies and adopt action plans that facilitates and encourages the government and private sector integration in a way that contributes to stimulating the local and regional demand.

Al-Sisi took up the presidency of COMESA from President of Madagascar Andry Rajoelina during the opening session of the summit.

He said that Egypt will do what it takes during its tenure at the helm of the African bloc to build on what has been achieved in the last period, and realize the aspirations of the member states.

He also expressed his confidence that the 21st COMESA Summit will introduce constructive recommendations to serve regional economic integration, wishing success for all participating delegations.

In his speech, Al-Sisi said that the global and regional economy has witnessed many developments since the last COMESA summit in July 2018. He added that the progress made in terms of continental economic integration has been accompanied by many challenges due to the novel coronavirus (COVID-19) pandemic.

Al-Sisi explained that despite the efforts made by the African continent to combat the pandemic, the region is still suffering from its negative effects, which require the COMESA members to unite their efforts to face these challenges through economic integration.

Besides its direct impact on the health and lives of citizens, the pandemic affected various economic sectors and the business environment in various member states leading to a decline in regional and global demand, the president said.

Therefore, Egypt aims to put forward a number of initiatives to contribute to deepening integration in a number of priority economic sectors among the COMESA countries, in the short and medium terms, he stated. Egypt will also promote continental integration, within the framework of the African Continental Free Trade Area (AfCFTA).

Al-Sisi indicated that increasing intra-regional trade requires increasing productivity and cooperation in the various manufacturing sectors, stressing that Egypt has prepared a Regional Industrial Integration Initiative in line with the COMESA Industrial Strategy 2017-2026 and the African Development Agenda 2063.

This initiative aims to study the resources available at the assembly countries and to integrate the targeted industrial sectors into regional and international value chains.

The President asserted Egypt’s keenness to intensify cooperation with member states to advance economic integration in the infrastructure sectors, especially in the fields of transportation, energy, communications and information technology.

Encouraging and attracting investment in the COMESA region requires more efforts from the member states to exploit the unique potentials of the COMESA, he stressed.

“Egypt will work to support and encourage the General Secretariat to cooperate with member states in preparing a list of clear investment opportunities for the business community and financing institutions, in order to increase economic growth rates and provide more job opportunities,” Al-Sisi said.

He added that Egypt is keen to overcome any obstacles facing the business movement in the region, asserting that Egypt will adopt all initiatives that contribute to facilitating the business environment, especially initiatives aimed at digital transformation and financial inclusion to serve small and medium companies.

COMESA was founded in December 1994, to replace the Preferential Trade Area (PTA) that had existed since 1981, as an organization of free independent sovereign states, which have agreed to cooperate in developing their natural and human resources for the good of all their people.