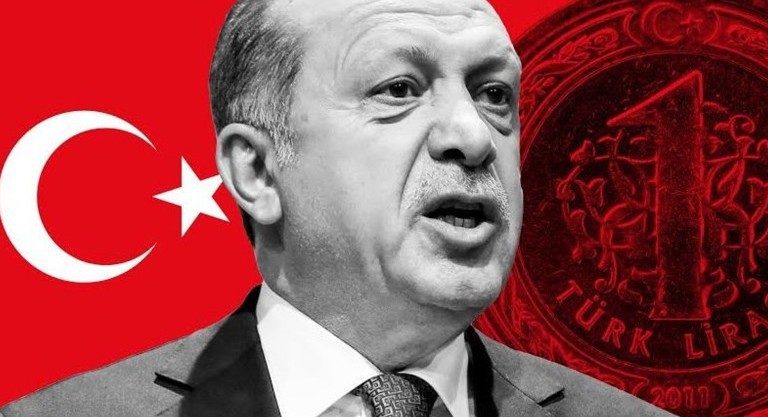 Despite the political and security stability that Turkey has experienced for a long time, the Turkish economy today is witnessing a severe crisis. This crisis is summarized in the sharp decline of the Turkish lira against the US dollar, and the resulting economic crisis affecting the Turkish market as a whole. In the previous days, the Turkish lira depreciated by six percent to reach the level of 11 lira per dollar, while inflation rose to nearly twenty percent. This came after the Central Bank’s decision to cut the interest rate by 100 points based on the interventions of the ruling party, and herein lies precisely the crisis of the Turkish economy.

In fact, the ruling party in Ankara stands against the independence of the central bank’s decisions, and always seeks to reduce the interest rates on loans. On the one hand, the ruling party believes that lowering the interest rate on loans will attract more investment. On the other hand, in contrast, the central bank keeps its interest high to ensure the permanence of its profits and the profits of the banking sector. This difference of views turned into a clear hostility between the two sides.

Thereupon, Erdogan’s speeches are always critical of the Central Bank and its policies and describe interest rates as “the mother and father of all evil.” There is no doubt that Erdogan aims with these practices to control the public economy after he succeeded in controlling the political sphere in the country. Nevertheless, such speeches in which Erdogan tries to appear as a hero have led to a decline in the confidence of foreign investors due to the conflict of policies and interests between the ruling party on the one hand and the Central Bank on the other hand. This leads investors to withdraw some of their investments from the Turkish market, which in turn leads to a clear increase in unemployment rates.

More importantly, the lack of confidence in the official Turkish financial policies prompted many investors and money holders to convert their Turkish money to dollars or euros. This naturally led to the depreciation of the Turkish currency against hard currencies and put Turkey on the brink of a severe economic and financial crisis.

In addition to this dispute between the ruling party and the central bank, Ankara suffers from many weaknesses in its economy that make the “Turkish economic miracle” nothing but false slogans. Figures and statistics indicate that the conditions of the Turkish economy have begun to decline since 2012, especially after the violent suppression of the Gezi Park uprising in Istanbul in 2013, along with the fighting with the Kurdistan Workers Party and the failed military coup in July 2016. These events seemed like a dark tunnel Turkey entered to suffer from economic and financial crises that are exacerbating day after day, despite Erdogan’s attempt to keep things under control.

One of the weaknesses of the Turkish economy is also the imbalance in Turkey’s trade balance. Ankara still imports much more than it exports in different products and materials. For example, the trade balance deficit in 2017 amounted to about $1bn. Moreover, Turkey does not have domestic production of raw and basic materials such as petroleum derivatives. This always makes it at the mercy of world prices, as if the price of a barrel of oil rises, Ankara loses billions of dollars.

The clash and tension with other countries are also among the most important factors of weakness in the Turkish economy. Turkey lost the Syrian market due to its direct intervention in the Syrian crisis, and thus lost the most important land bridge for its products to the markets of the Arab Gulf states, Egypt and Jordan. In its clash with Egypt during the era of President Abdel Fattah El-Sisi, it lost its ability to market its products to African markets. Also, the clash with Russia (before the reconciliation) made Turkey lose a lot of its trade and tourism. This is in addition to the tension with the European Union, which prompted the European Parliament to freeze its membership negotiations, which negatively affected Turkey’s trade with the European Union countries. In this context also, the tensions in Turkish-American relations and their negative impact on the economy cannot be overlooked. Because of all of the above, the tourism and trade sectors are suffering from stagnation, if not bankruptcy.

Apparently, the Turkish economy does not seem to be in a good condition at all levels, and tampering with the diseased Turkish lira has become very easy. All this certainly legitimizes the demand for early elections. In fact, Erdogan was able to defeat all his opponents and fortify his presidency with strong constitutional powers. However, the collapsed Turkish lira remains the strongest and most powerful opponent of Erdogan.