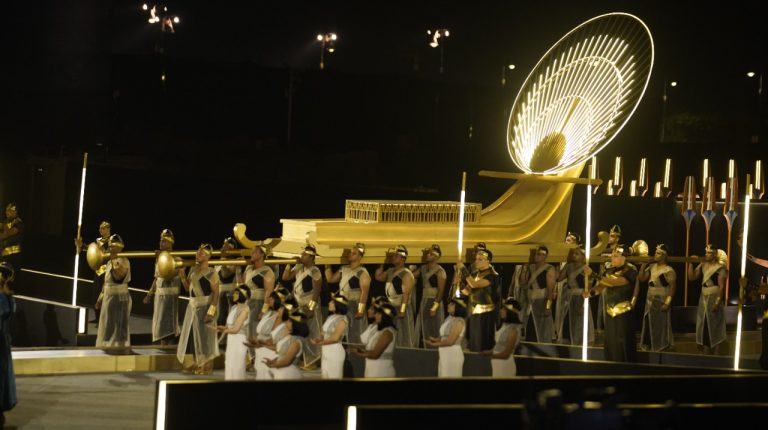 Luxor- Egypt has dazzled the world again today through the reopening of the Avenue of Sphinxes or the Rams Road. In a modern twist, the ancient Egyptian Opet festival was resurrected.
The world’s attention turned to Luxor on Thursday evening, to witness the celebrations that the ancient Egyptians performed more than 5,000 years ago during the “Opet Festival” in the heart of the Avenue of Sphinxes (Rams Road) live and at the hands of the grandchildren of the Pharaohs, under the auspices of Egyp’s President Abdel Fattah Al-Sisi.

Everyone was dazzled with Luxor’s beauty and all its unique tourist and archaeological components, as the celebration extended throughout the city by land, river and air.
The ceremony began with a gradual panoramic illumination of Luxor Temple and the Road of Rams along 3 km.
Then Egypt’s first lady entered the ceremony followed by the President Al-Sisi and Minister of Tourism and Antiquities, Khaled El-Enany where they walked in the first pylon and El-Enany explained the developments made by Egypt in the Rams road and the whole temple.
The western mainland and the Temple of Hatshepsut, the statues of Memnon, were lit, and the laser lights embraced the sky.
Artist Mohamed Hamaki participated in a welcome song for the visitors of Luxor. Then a documentary film was played, showing the unique and different compounds of tourism in Luxor and that it enjoys cultural, ballon, Nile cruise, and flouka tourism. A lot of bloggers and YouTubers participated in the documentary film including Amr Wahba, Bassant Nour El din, Logina Salah in addition to actress Asmaa Abou El-Yazid.
Also, Mostafa El-Saghier, Karnak temple director, Mostafa Waziry, and El Enany participated in explaining the unique experience that the tourists can enjoy in Luxor.
In addition, many horse carriages were equipped and lighted uniquely, then the famous Reda band performed the famous Reda band’s song “Luxor is our country is a country of tourists, with a new music arrangement made by Nader El Abbasi.
Then the Minister of Tourism gave a speech and introduced that today Egypt will resurrect the Egyptian Opet festival through a performance. Opet was an annual Feast that is the 2nd month of the flood season.
The performance included Nile Barque (a ceremonial boat that was used to transport statues of gods and deities), symbolizing the trinity of the sacred gods Amun, Mut and Khonsu.

Meanwhile, colourful sailboats launched in Luxor’s visual identity colours, and several balloons launched in the sky of Luxor to celebrate the opening.

From inside the Luxor Temple witnessed the transfer of three Ancient Egyptian boats from the Luxor to Karnak temple celebrating the flooding season known as the Opet festival. And then the ceremony ended with fireworks in the sky.

The ceremony witnessed the presence of several important figures in Egypt and the world. nearly 20 ministers, more than 200 representatives of local and international news agencies, newspapers and television channels, and a group of Egyptian and foreign bloggers and influencers also attended.

Notably, the Sphinx Avenue connects Luxor Temple and Karnak Temple with a length of 2,700 meters. The Rams Road includes statues of different families, amounting to 1200 statues of Amun-Ra and the Sphinx. The ancient Egyptian called the Road of Rams “Wat Nether“, meaning the way of God.
On Rams Road, the celebrations of the Opet festivals were held every year.