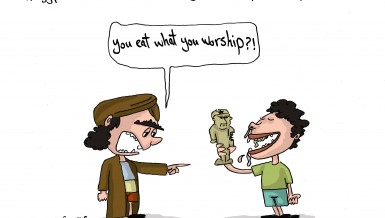 By Mohamed Abel Monsef and Ahmed Salama Three million people visited Tanta, capital of the Gharbia governorate, to participate in celebrations of the Moulid Al-Sayed Al-Badawy, a carnival that celebrates the birthday of a member of the Prophet Mohamed’s family. The celebrations were held from 10-17 October. The annual celebration has served to connect …

Lately, Sufis have been one of the vital cards utilised in Egyptian parliamentary and presidential elections. Being supportive of the “civil state” camp and against political Islam added more to the long list of misconceptions about Sufis. Not only are they depicted as indulgers in folkloric celebrations, poetic recitals and religious chants, but also as allies of secularism, a precondition to be bashed by their rival religious group, the Salafis. Daily News Egypt explores the meaning of Sufism through the eyes of its adherents, the insightful explanations of some Sufi sheikhs about the long rivalry against Wahhabism and the current Sufi involvement in politics.